Cheyenne Prater ’20 has been participating in the 13th Annual Korea-America Student Conference as an American delegate, alongside eighteen other college students representing the United States and South Korea, since graduation. She is currently conducting research, as a member of a smaller team, on the historical and current inequalities within US-ROK diplomatic relations. Their work will be presented at a research forum at the conclusion of the conference. 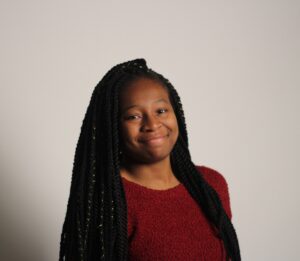 In addition, Cheyenne is serving as the Recruitment Chair on the Executive Committee of the 14th Korea-America Student Conference. The committee is currently organizing and recruiting student delegates for next year’s iteration, scheduled to take place in Busan, Seoul, and San Francisco over three weeks in July. While working on this team, she is also preparing to participate in a US-North/South Korea Youth Workshop hosted by the United States Institute of Peace (USIP) in Washington, DC. This is a virtual initiative that will bring together young leaders from the U.S. and South Korea as well as North Korean defectors for a three-day workshop to share perspectives on strengthening peace and security on the Korean Peninsula.

In her free moments, Cheyenne has been working on applications for graduate programs in international affairs and Asian Studies, with the aim of pursuing a career in foreign service.

Ren Makino ’20 graduated with honors in May 2020 from Lafayette College. He double-majored in Asian Studies and International Affairs and minored in Spanish. He completed his Honors thesis, Yamabe Kentarō the Modern Japanese Individual and the Margins of the Public Sphere, under the supervision of Professor Paul Barclay (History Department).

Jing Ning ’19 is pursuing a M.A. in East Asian Languages and Cultures at Columbia University. She is focusing on Japanese history. As an undergraduate at Lafayette, she double-majored in Asian Studies and International Affairs and minored in Religious Studies. She spent a semester studying Japanese in Tokyo as part of the Temple University Program. Jing graduated with Honors in Asian Studies in May 2019. Jing’s Honors thesis looked at the work of a prominent Japanese artist Sakai Hōitsu (1761-1828) of the Rinpa School. Her thesis advisor was Professor Ingrid Furniss (Art Department).

Vanissa Prempeh ’17 completed a M.A. program at the Johns Hopkins University-Nanjing University Center for Chinese and American Studies. She is a recipient of a Hopkins-Nanjing Starr fellowship. Vanissa graduated with honors in May 2017 from Lafayette College; with a double major in Government & Law and Asian studies and a Chinese minor. Her area of focus within the major was International politics with a regional specialization of East Asia. Indicative of her background in the Ghanaian informal economy, Vanissa’s senior thesis looked at Chinese migrants in the African informal economy. She is pictured below with her thesis supervisor, Professor Seo-Hyun Park (Government and Law Department). 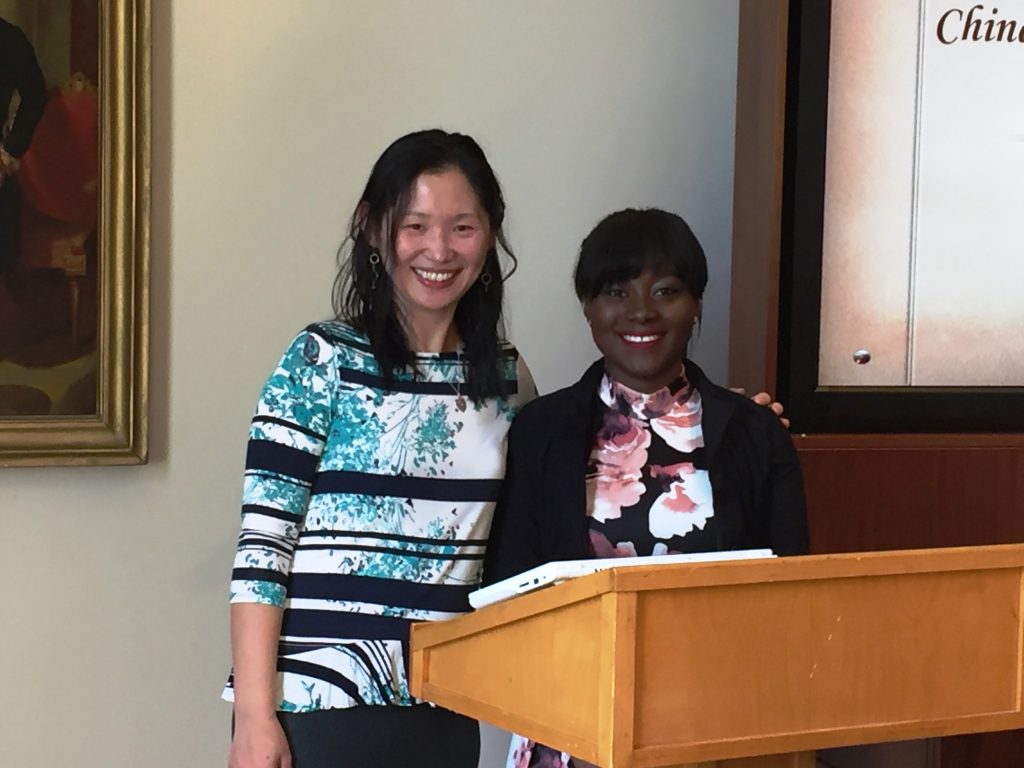 Some of Vanissa’s  previous research projects include a comparative study of African migrants and their integration into Guangzhou and Yiwu society; as well as an Overview of China’s engagement in the African continent by region (and select country case studies). 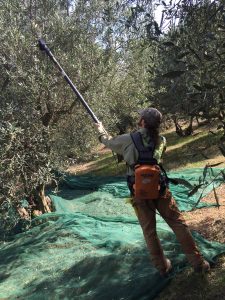 Joe double-majored in Asian Studies and Engineering Studies, and he minored in Anthropology and Sociology. With the guidance of the Asian Studies faculty, Joe was able to balance and combine these various subjects into a study of socio-technical history in Asia. This culminated in his capstone project, a critical re-telling of the global agricultural history of the 20th century that places Japan in the spotlight.

Nicholas Limburg ’15 recently returned to the U.S. after spending four years living and teaching English in China. While studying abroad in Kunming, China, during his junior year, Nick operated out of a bilingual field office in Yunnan Province, where he learned World Health Organization protocols as he dealt with public health issues such as tuberculosis. He graduated with honors after writing a thesis under the direction of Professor Il Hyun Cho (Asian Studies Program and Government and Law Department). 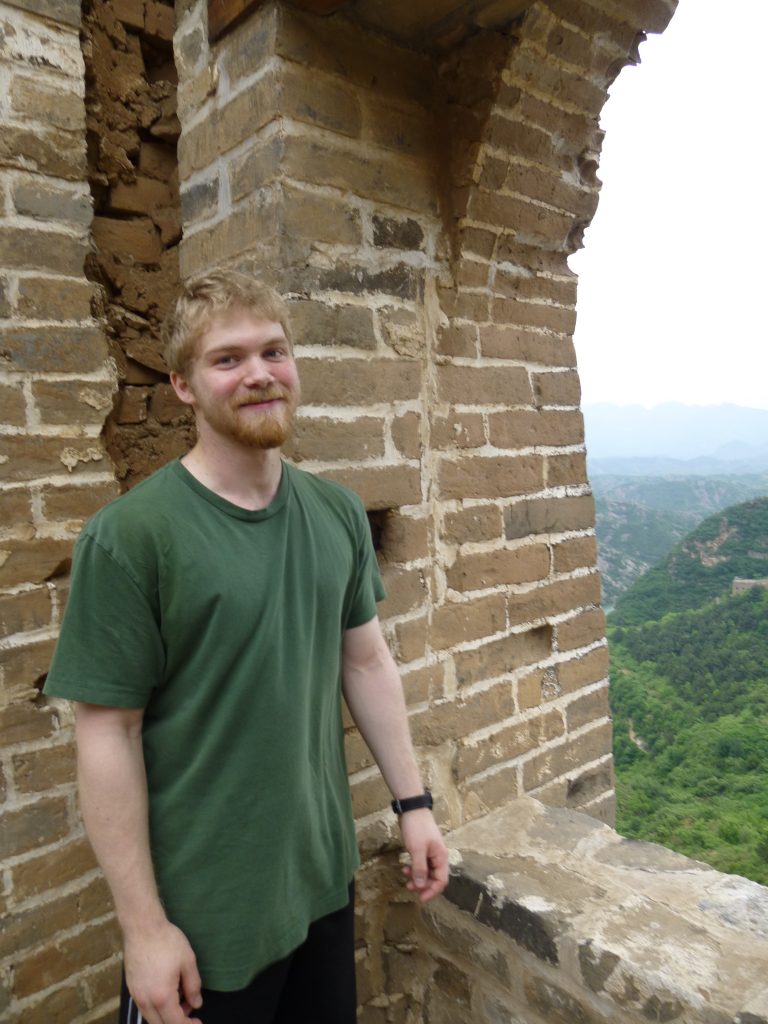 While teaching in Lishui, Zhejiang, Nick sent this sketch of his life:

I am the only foreigner at my primary school. For many people in my small city, I am the first foreigner they have seen in person. My first few weeks here consisted of being addressed with timid hello’s and a great deal of staring and pointing. However, after the initial shock and strangeness had passed, my students began approaching me to chat with what English they had. The brief exchanges I now have with students as I stroll across the playground range from “Hello. How are you?” to “I will go see a film this weekend. What about you?”…When I came to China I had an intellectual grasp of daily life formed from my college books. Now I have a budding understanding born of experience as people invite me to socialize with them. The people here are quite friendly and often invite me to festivals, scenic sites, or simply dinner. I discuss, or at least listen to, their daily lives and recent events in the city, China, and the world. One of my more memorable occasions is visiting a friend’s family for National Day. The grandmother taught me how to fold a local food called meimaosu: 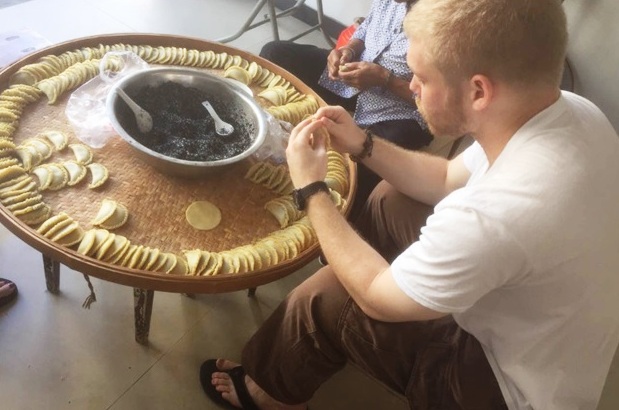 In 2017, Matthew Keeler ’14 earned his M.S. at the Rutgers School of Biomedical Science. He currently assists researchers by performing surgery in the laboratory as he pursues his dream of becoming a physician. 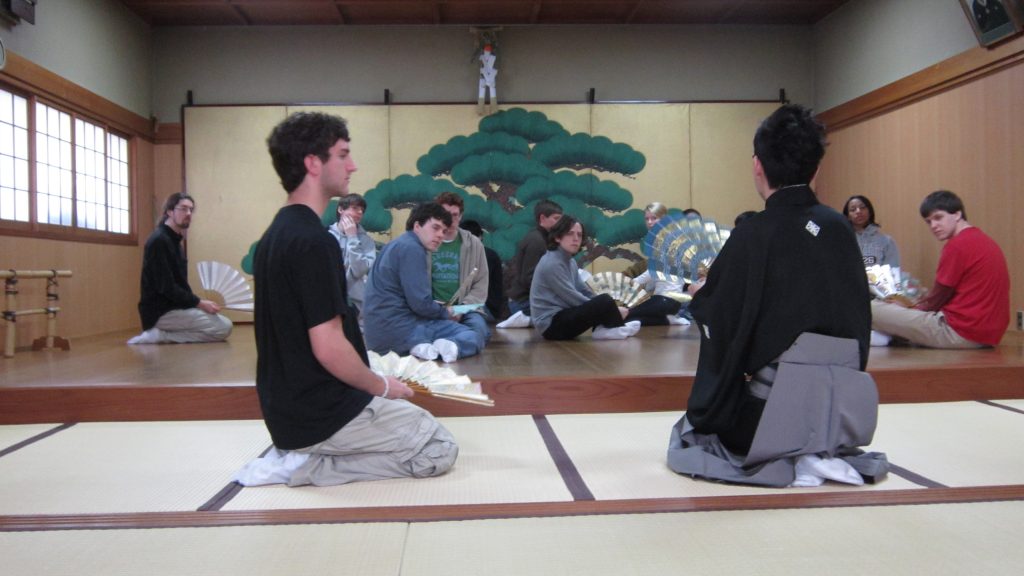 At Lafayette College, Matt double majored in Asian Studies. In addition to his classroom work, Matt participated in interim study-abroad classes to Japan (Kyoto, Osaka, Hiroshima) and to South Korea (Seoul, Busan and Gyeongju)/Japan (Tokyo/Osaka). Regarding his Asian Studies work at Lafayette College, Matt reports that his long-term exposure and immersion in the academic study of such a complicated region prepared him well for the analytical sections of his MCAT exams, giving him a decided advantage over his more narrowly trained competitors. 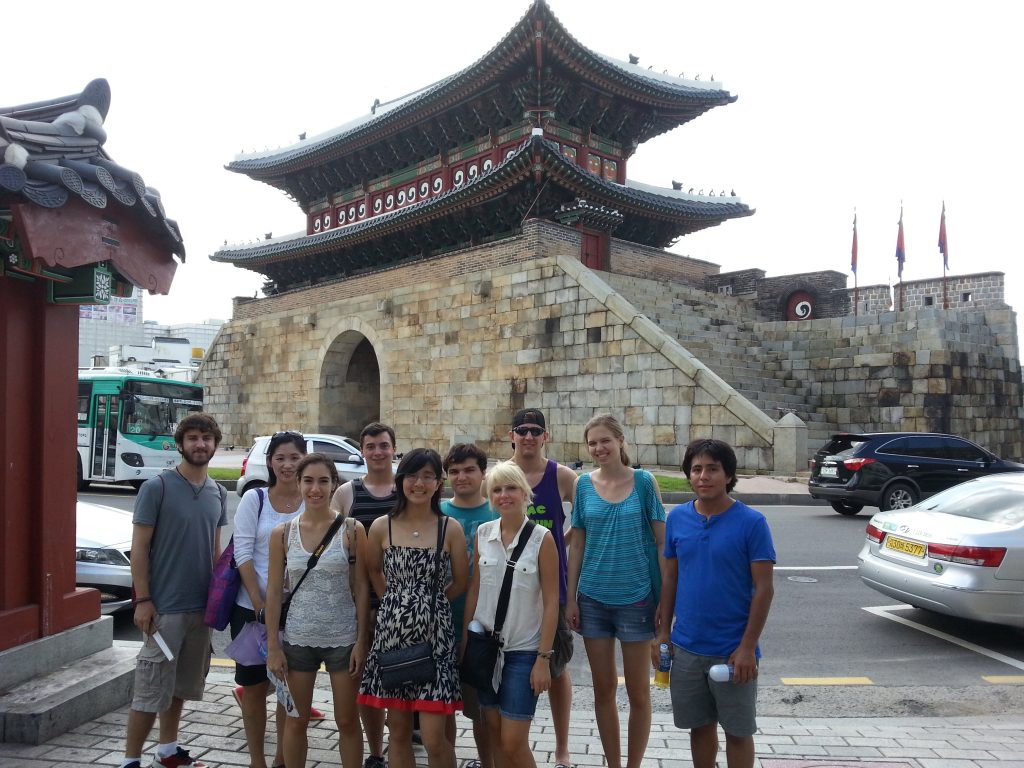 Scott Kominkiewicz ’12, is currently an admissions officer at Vanderbilt University. Nashville, TN. Following graduation, Scott went to Japan to teach English through the Japan Exchange and Teaching (JET) Program. Kominkiewicz’s fascination with Japanese culture began his sophomore year, when he took a world history course with Paul Barclay, associate professor of history. Three years of learning the language followed with Naoko Ikegami, instructor of Japanese. He also spent a semester in Saitama, outside Tokyo, which was cut short by the devastating earthquake and tsunami and subsequent disaster at the Fukushima nuclear power plant.   Determined to return to Japan, he accepted a position as an Assistant Language Teacher through the JET Program in Hokkaido Prefecture. In addition to teaching, he also was also selected to manage the Hokkaido English Challenge, a non-profit camp that provides an English-immersive environment for interested junior high and high school students as well as funding for exceptional students to pursue a homestay experience in an English-speaking country. After his sojourn in Japan, Scott returned the United States and found his calling as an admission’s officer after an internship at Princeton University’s Undergraduate Admission Office. “I am forever thankful to the entire Asian Studies faculty for introducing me to Japanese culture, and fostering my fascination with it.  I’ve noticed that what I learned in my classes at Lafayette has prepared me for success in every one of my experiences post-graduation,” says Kominkiewicz. Next year, he plans to begin work on his M.A. in Education. 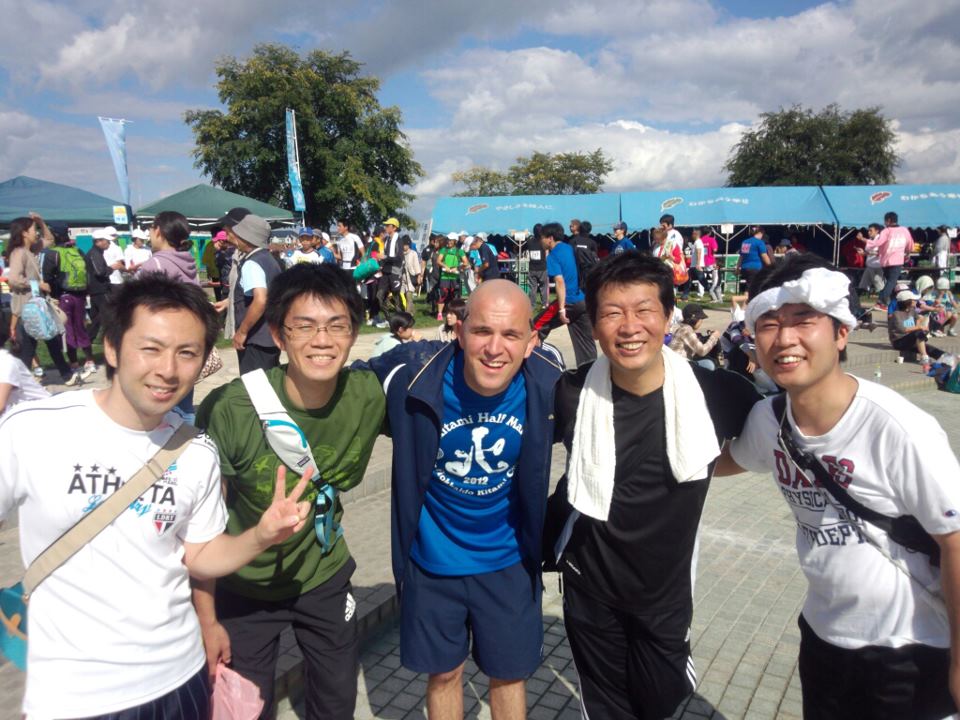 Nathan Shatz ’11 graduated from Lafayette in 2011 with a double major in Math and Asian Studies. He spent the second semester of his junior year in Beijing and loved it so much that he moved to China after graduating. Now after many years living in China, he is fluent in both the language and culture. Equipped with his dual degrees, Nathan experienced a job search most people would die for. “I contacted the school online. Within a day, I had an interview. Within a week, I had a job,” he says. That school was Birmingham International English in Changsha, Hunan, China. “It’s the biggest city no American has heard of,” Shatz reported as he was getting started in his new post. “Seven million people live here.”

Shatz continues, “Without Lafayette College, I don’t think I would have found my China trajectory.  I first came to China because my Lafayette Chinese teacher recommended me for a three-week government exchange program in China.  The experience was transformational. I added Asian studies as my second major and began to take as many classes related to China and Asia as I could fit in. In the Asian studies classes I met internationally-minded professors and had small-sized classes, which led to big-time learning and awesomeness. For my Honors Thesis in Asian Studies, I worked with Professor David Stifel and did research in China. There is a Chinese proverb that says ‘reading 10,000 books can’t compare to walking 10,000 miles’ (读万卷书不如行万里路 du wan juan shu buru xing wanli lu). Experiencing China first hand led me to discover my passion and direction, and I am grateful that I was given the opportunity to live the life that I do.” 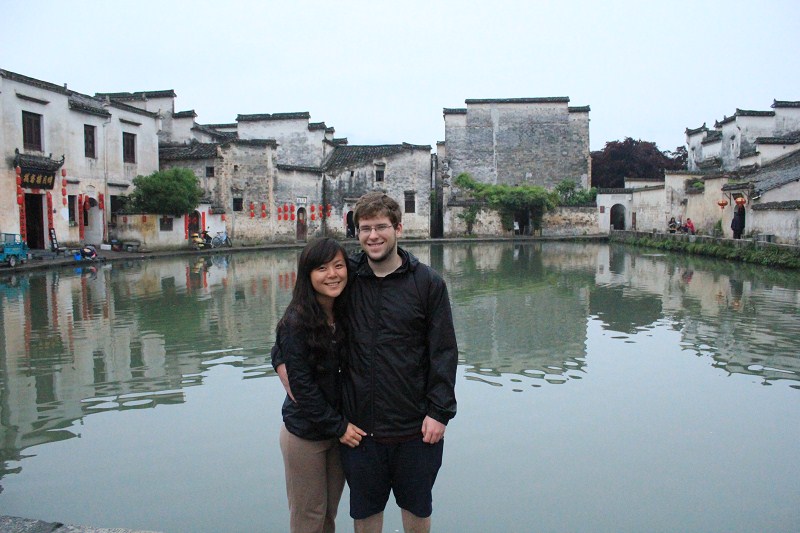 For Will Dunkel ’07, coursework focusing on Japan and China led naturally to a desire for a better understanding of the lands and cultures of those in the land affixed between, namely the Korean peninsula. It was that yearning that convinced Will to move full time to Korea in early 2009. 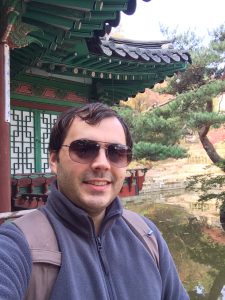 For the past eight years Will has called Seoul, Korea home. What had begun as a simple foray into living in Asia has grown into a life-long passion. Several years as a teacher in Seoul led to opportunities to again study, as I have since earned my Master’s degree from Korea University in Korean studies focusing on Korean New Media.  I am forever indebted to the support given to by Lafayette faculty, who even now years after my graduation still provide guidance and academic advice as I pursue a Ph.D. in Korean Studies. Students who are curious and have any interests in Asia would be well served by working with a faculty that is fully determined in growing and nurturing students of all ages.

Our Pulse Our People